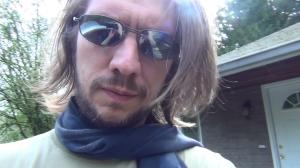 Every week after I produce the radio show, I immediately burn it onto CD so I can listen to it in my car all week long. It helps me understand what works and what doesn’t, and cracks my son up when he’d otherwise be ignoring me (or whatever’s on NPR, pretty much the only station I listen to). So after last weeks’s avante-garde jazz outing, and the previous week’s trip to see gypsy folk jazz Pearl Django, the contrast to this week’s show is striking:

This show rocks. Hard. Plagus is a horrible DJ, only rarely names the musicians or the songs, but he picked out a list of face-melters and managed to hit up some of my favorites from the first two seasons. It’s got bilstering techincal accumen from Rousseau and Katsumi, sublime pschedelia in the form of the Dr. Who theme, sci-fi theater of the mind with Morrison’s Prohpecy and Liberteria, and a double-shot of love songs. I’m not endorsing what he did, and there were still penty of production errors in the show(!), but I had to go to work and wrestle with pre-production kindles (sit kindle. good kindle :-D). just super busy, so I’m happy to be able to offer you a show from the Dog Hause’s favorite distributed agent of evil, Plagus the Recycler. Mona pitches in too, can’t forget her, she would never let that happen. And now it’s time for you to do your part, which is conventiently enumerated in two bullet points here since i’m Wednesday lunch posts tend twoards verbose:

1) Listen to the show, at this location on my fandalism page, an audioburger.com, on the audioburger channel at spreaker.com, or my soundcloud. It’s not hard to find :-D.

2) If you like the show, consder sharing it, reaching out to the artists and letting them know. And if you’ve got enough extra coin for a cup of fancy coffee, consider spending the equivalent on some new music and actually showing them how much you appreciate their work.

The truth is, none of the indies are getting paid, and they should be. Everything you hear at audioburger.com can compete directly with FM and TV for your entertainment clock cycles, and it’s all mashed up in facebook so you don’t even have to leave your chair. You could even have a sandwich, just like when you’re watching Jersey Shore, if you’re lucky enough to have somebody to make you one (Rango doesn’t cook).

Make this face: 😀 and this one 😮 and this one \m/. Actually make two of those and toss in an earworm and some cow.

Nobody’s safe in this episode as Rango abandons the comforts of Facebook for a new home, takes time out to focus on love and family, and finds all of his efforts sabotaged by his evil nemesis Plagus. Join the circus to ride as we feature the music of Twisted Folk, Rick Rousseau, Katsumi Yoshihara, The Shanklin Freakshow, Simon James White, TRAFFiC EXPERiMENT, Savage Henry, Sabrina Pena Young, Morrison’s Prophecy | Seattle, WA, The People Now a dude named Tim Hearn, as the Songs of the Emerald City take to the streets in our season II spotlight, a little bit late.