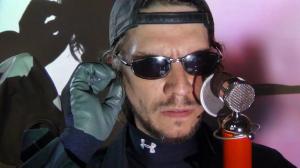 Hello friends, it’s been weeks since I’ve posted through Rangothedog.com, the official mouthpiece of the beast. I’ve been on hiatus. Life served me up some great raw material for a screenplay,but it wasn’t conducive to writing at the time. Through the skillful work of realtor Amy Trout I was finally able to sell my house in Lynnwood after being stuck there as a single dad, underwater on the mortgage and spuriously unemployed, for more than 18 months. Very happy to see that place go, not only the 1/2 of  a large U-Haul truck full of garbage that was hauled out of there (including 3 couches), but particularly the demon that lived in the refrigerator. That thing was nasty.

Big deal, I moved.  Seems like fodder for some interesting posts.  So why the quiet period?

Aside from the time and energy spent on the move, which ended with a 70 hour continuous test of endurance that bridged two overtime weeks at the office that included such highlights as losing my glasses/contacts for four days, conditions at Amazon became completely intolerable and I was looking for work even before my contract terminated. I continued to produce Audioburger Radio Shows during the interim, each of them a little late (with a nod to Tim Hearn), but decided that it was a good time to suspend the blogging in lieu of preparing for interviews, unpacking, and catching up on my recording obligations.  I was moody and experiencing inflamatory circumstances at the house such that I decided a quiet period would be less likely to result in some regrettable comment archived for all eternity on Google complicating my job search.

So, one life reboot later, I’m back.  I’ve moved into a rental in Kenmore, closer to my kids and my new job.  It’s an older house overlooking an acre of wetland, with a compliment of neighborly chickens and ducks next door, which makes for some very animated and fun radio skits and photographs to use as honey pots on Facebook.  It’s a definite upgrade, and playing out on the deck for Franklin with a backup chorus of frogs is pretty much my new favorite thing (and his too, judging by the amount of thumping and binkies he delivers with every set). 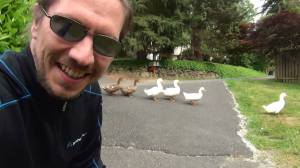 As for the job, I managed to stop the countdown to eviction after only 8 days, my fastest time-to-contract ever in nearly 20 years of professional development.  I actually landed multiple offers on the same day, so serious props Tek Systems and recruiter Brian Vivaldi for helping me put together the play.  I’m working at Microsoft Research now as a contract research development engingeer, at least for the short term, and very happy about it. Between parking and drive time alone I expect to save $4,000 US and 400 hours per year compared to my previous location and job at Amazon.  The work is also extremely interesting, will vary continuously, and they’ve given me a lot of autonomy to simply work the way I work best: closely with one person, with no designs or specifications, but rather immediate objectives and a concensus on the tasks needed to achieve them.  I was checking in bug fixes on my second day and by the end of my second week had prepared a new feature with that touches the client, the middle-tier and the backend. To contrast, at the same two-week checkpoint at Amazon I was wading through the permissions and developing the proprietary systems knowledge needed to implement specifications down to the pixel on a new device that was extremely sketchy, while simultaneously deep-diving on wikis in a war room with six other people on a schedule with literally zero wiggle room.

Amazon’s an amazing machine and may very well rule the world some day, but it was just a terrible environment for me, somebody who can work extremely fast but is easily distracted, particularly by noise as it imprints upon my visual spectrum with growing acuity as I face sleep deprevation.  This is due to chromesthetic synesthesia that emerges as an adjunct to my manic bipolar phases, and the extra time pressure from the commute and simply being expected to absorb overtime hours just made things all that much more unpleasant and less conducive to success.  Indeed, by the two week checkpoint I was referring to it as my “soul-sucking” job, a clear indicator that things are trending more positive now. 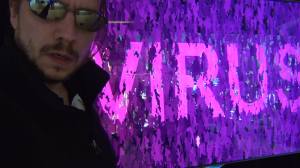 Finally.  Hopefully.  We must stay the course, because just like Amazon, there’s no wiggle room here.  A few more days and I would not have been able to pay my rent, and I have slipped further into debt. Because this is not just My Life as a Musical, it’s actually my life.

So, quiet period’s over.  We’ve got a new pace, a new rythmn, a new job with new projects and goals. Due to a burgeoning collaboration schedule and a rising arc of popularity it’s still a lot of time pressure here, enough to keep me busy every minute of the day for the next year.  But with some minor discretion of my time I was able to find a few minutes to go out and play for Franklin tonight.  That’s critical, because as I bring my guitar hiatus to a close and look forward into the next year, I need to find some time to play music every day and get my chops up again. Because this is My Life as a Musicial, and this is the Year of the Dogg.

This week’s radio show was recorded and broadcast directly from our new studio in Kenmore, live with my brother Patrick Kindy.