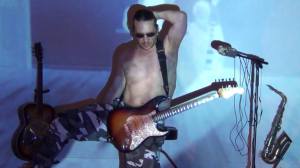 2013 was not just bad luck for me, it will forever be defined by lack-of-hypothesis, a horror show of political gamesmanship and indiscriminate disregard for the people on the ground.

(france nuts up: they’ll go unilaterally until they don’t a week later)

“$1B for his chemical weapons” – putin

[us government default, people in the us clobbered & killed by cops]

Poster art for the world premiere of Liberteria.

on fox: “i couldn’t count them either, then i did” – assad regime, denying they could count their munitions used to kill thousands of their people because the rebels must have done it, and they didn’t have phones and shit, then delivering the inventory w/receipts all good, bro, 1B US large.

“i’m a fucking hero. make a movie out of me” – snowden, touching himself w/usb key.

“no amnesty for snowden” – people that think he’s a hero and get to say so because of people that actually were, and died for him, though he would never do the same for them.

consider the people that gave their lives for you that snowden left to hang.

he knew their missions, he lied to get them from the people sworn to protect you, and then he factored the scope of the most massively complex cybernetic defense system in the history of mankind into his personal calculus of fame. he determined his right for eternal infamy over your right to liberty or death, all by himself, and chose himself, without remorse.

more people will die from his actions will ever be known, because the us government and other intelligence agencies do not declare their victories, and nor should they. that would be stupid. they are intelligence agencies, that would be remiss. in response, the people that would kill you without remorse because of your religion, your country, or your color have changed their tactics due to snowden and will never be known to us, just as osama bin laden tossed his cell phone and enjoyed 10 more years of terrorist deism after a reporter went for the big story instead of common sense.

“give me a chinese snowden” – pawn takes rook whilst hacking \m/~

“your parole officer said you’re not allowed out of the house” – Rangounmuzzledwe’re: melty-face-bowly-things as rango takes off his ankle bracelet w/ soldering iron & scope

“k” – #benfuknbad, counting in base-11 over an 8 string fretboard

Rango closes the curtain on 2013 with the Zombie Apocalypse head cold and a rapid-fire succession of tracks from some of his favorite Unmuzzled Artists. Featuring the music of:

today’s broadcast on the spreaker archive: