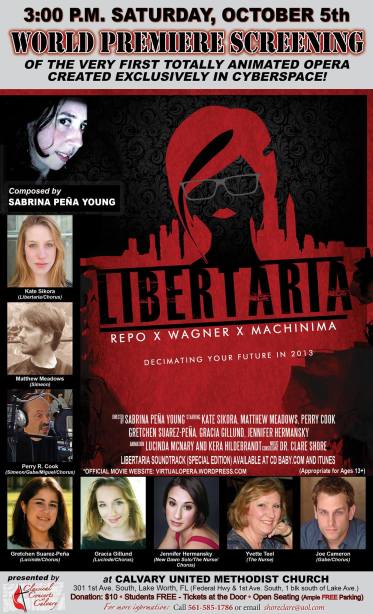 Poster art for the world premiere of Liberteria.

very privileged to have taken part in this cutting edge piece of mashup art,

what a great cast and amazing creativity, storyline and execution.

“one girl to save the world”

Peña Young, a bubbly, intensely energetic native of South Florida, has created an animated “virtual opera” called Libertaria, a self-scripted sci-fi dystopia she cast entirely online, finding her singers through websites, Facebook and other Internet forums and having them send in vocal recordings of their parts. She’s never met most of the volunteer cast.

In addition to playing the music herself on an electronic keyboard, Peña Young also created about 75 percent of the animation for her hourlong work. Libertaria is probably the very first machinima opera, and its world premiere screening is set for Saturday afternoon at Calvary United Methodist Church in Lake Worth.

“If ‘Star Wars’ had taken place 100 years ago, it would have been an opera,” Peña Young said last month from her home in Buffalo, N.Y. “That’s what I’ve been trying to bring to people, that you can listen to this music, that you can enjoy this music, and it doesn’t have to be something where you’re sitting there saying, ‘This isn’t for me,’ or ‘This has no place today’ …

Libertaria is set in a post-apocalyptic United States in 2139, which has been devastated by a nuclear war that has ruined the environment and transformed the polity into warring factions. A castoff girl named Libertaria, abandoned in the Lady Liberty Souvenir Shop as an infant, has escaped the Factory (an evil place of test-tube human manufacture) and made her way to the territory of New Miami.

There she meets Simeon, an underground guardian of children who are being victimized by the masters of the Factory, an alliance known as the Collective. The seeds are sown for rebellion, which Libertaria is soon to lead.

Peña Young, who is currently finishing on a novel based on her script, said she could see something along these lines happening.

“Part of the reason I wrote the opera was to be a prophet: This is what could happen, but if we change things now, it probably won’t happen … It’s taken to the extreme-extreme-extreme, but on the other hand, the threads that run through it are threads of what’s going on now,” she said. “For instance, our government is supposed to be representative of the people, but if you ask anybody, they say, ‘What are they doing up there?’”

what a beautiful day!!! thank you so much, sabrina!!! brilliant!!!

One thought on “Liberteria World Premiere”